We stroll through the village of Ortisei in our hiking gear to find the gondola up to Alpe di Siusi. As the 12th century bells of the San Giacomo ring, we rise over a deep valley and past ragged cliffs of wildflower. At the top, ten minutes later, a range of “monti pallidi,” or pale mountains, are arrayed in spiked turrets and saw- toothed pinnacles.

“It goes on forever,” Brian says.

Formed 230 million years ago, from petrified coral reefs along an ancient sea bed, we are surrounded by a myriad of pathways up, around, over, and through rolling fields and straight up bald faces of Sassolungo and Sella Mastif. Although there are lifts and cable cars available to reach the valleys below the peaks, we choose to hoof it over mountain trails, hiker-style. With an Alpe di Siusi map, we tromp five hours through Monte Piz, Joch Giogo, and follow the ledge trails up Tierser Alpt.

“This is a mountain goat trail,” I tell Brian. One hour later, with views to Marmolada and Antermola, we are rewarded by a refuge “hutte” offering Paulaner lager and goulash soup. All at 2,500 meters, the peak, with flush toilets and picnic tables with umbrellas! We are a sweaty bunch of hikers at this altitude and with various languages going, we point at maps and laugh at our exertions to this heavenly retreat.

The hike down takes us through Goldknopf, Schwaige, and finally to Saltria, where we find another “hutte” and another well-deserved lager. We continue down a valley, through fields of Edelweiss, pockets of lodge-pole pine, and ravines of evergreen and spruce. 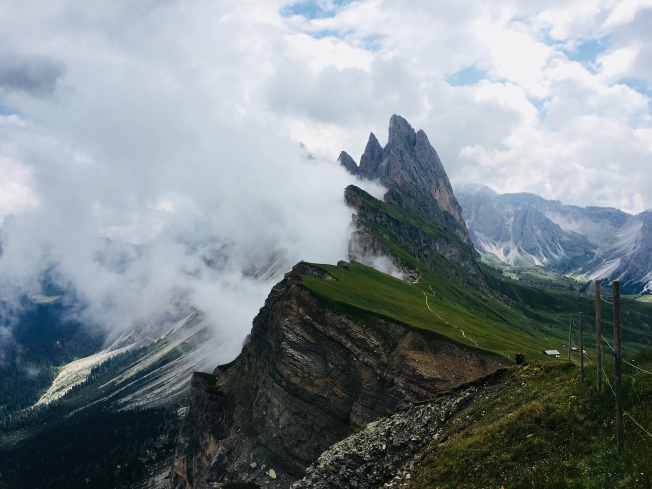 The next day, we take the Seceda cable car directly up to windswept views of Geisler and Cirgruppe, a collection of sheared rock, cut in half with cloud. The trails careen along vertical cliffs and meander past mountain rhododendron. Everything is cast in brilliant limestone. We are surrounded by an undulating vista of spires, towers, and apexes, and far below us, we spy a welcoming hut with picnic tables and flags waving. We know we can take refuge for a long lunch, another Tyrolian lager or two, and then a leisurely stroll over to Ortisei via village walking paths past St. Christina and St. Jakob. The day is long, the sun is out, and the spa is waiting for our return.

The nice things about a notebook and pen are that they don’t weigh much and you don’t need batteries. You can pull them out and sit on a rock or lie on some moss and be perfectly content writing about pleasant things such as the sweet spiraling off your brow as you hike directly up what appears to be a rock cliff called Tuckerman Ravine.

Known as a “Skiers Mecca,” many make the trek up and down Tuckerman, skis, poles, boots and many layers of clothes in tow. The steep slope is covered in snow for half a year.

At the trailhead there’s a buzz in the air that smells of pine, drying river mud and crushed leaves. A couple, decked out in polypropylene and hiking boots, spread a map between them, pointing out some trails.

They show me topographic maps with a dramatic elevation gain of more than 4,200 feet. Located in the Cutler River Drainage on the east flank of Mount Washington, the ravine is in a deep pocket of the White Mountain National Forest.

As I prep myself to start the long climb up the trail I think of Thoreau. “All endeavor calls for the ability to tramp the last mile, shape the last plan, endure the last hour’s toil,” I quote him for some motivation. “The fight to the finish spirit is the one characteristic we must possess if we are to face the future as finishers.”

There are fathers with sons walking past, some with backpacks, most with walking sticks. One father cajoles a preteen to think of the stories he can tell back home in Connecticut about climbing to the top of Mount Washington. The boy appears to listen and keeps his trudge straight up the trail.

Women travel in packs of threes and or fours, and they chat and laugh, energized by the scenery of friendship and nature.

My notebook gets filled with images of hikers, chattering squirrels and the curve of a ravine’s wing upon granite ledge.

Driving up toward the picturesque town of Holderness, Rattlesnake Mountain is a hike with a view of Squam Lake. Famous for being the locale used for “On Golden Pond,” Squam Lake sits in sapphire brilliance below Buster and me.

Buster chases squirrels and chipmunks up into trees and under fallen logs. The air is clear and strong at the top, and whitecaps are whipping the lake into a frenzy. Boats bob and a water skier creates a miniature wake as I take in Carr Mountain, Mount Kineao and Stinson Mountain. Although a little more than 1,500 feet in elevation and a quick 1-1/2 miles round trip, this is a hike not to miss for the 360-degree view of mountain blending into lake.

On the trail of the elusive moose in Jackson, New Hampshire

It was the perfect moose marsh. Mucky, with swarming mosquitoes, in hidden Bog Brook near Jackson.

I was determined to find the elusive moose of New Hampshire, without a guide, without a plan, without common sense.

I had Buster, my ever-fearful Labrador retriever, as a sidekick, and a couple of maps. It couldn’t be difficult. There were plenty of “Moose Crossing” signs around here. So, that meant it wouldn’t be long before Buster and I saw a moose.

Buster and I had checked in earlier at Whitney’s Inn, a classic lodge perched high on Black Mountain. With its log hewn furniture, plaid blankets, wood-burning fireplaces and framed portraits of moose and bear, it was the perfect site to have a base camp for moose watching.

Don, the owner, told me,“We organize moose tours, if you can’t find one today on your own.”

Henry David Thoreau chronicled seeing moose while hiking routes upstream and downstream of the Concord, Pemigewasset and Ammonoosuc rivers. So, Buster and I took a clue from Thoreau and continued along Bog Brook until we hit the muddy tributary of a stream. There was no bridge to hike over, so we waded through.

The crossing didn’t go well. I had to carry Buster.

I quoted some classic Thoreau to Buster to calm him down: “I went to the woods because I wished to live deliberately, to front only the essential facts of life, and see if I could not learn what it had to teach, and not, when I came to die, discover that I had not lived.”

According to New Hampshire Fish and Game, an adult moose can average 1,000 pounds and stands more than 6 feet at the shoulder. They’re near-sighted, but have excellent senses of smell and hearing. Buster and I had been rather loud on the trail. I decided our next plan of action was to be quiet. I also sprayed more Deep Woods Off on the back of my neck for sensory camouflage.

The optimum time to see moose is either early morning or dusk. It was midday when Buster and I came to the bottom of a moss-covered basin. A small waterfall sent plumes of cool spray over us. Columbine curved over granite, and the squirrels chattered overhead, flipping from one branch to the next.

Buster chased one, then another, and caught nothing. I pulled out a peanut butter sandwich and my guidebook.

“Moose” is an Algonquin term for “eater of twigs,” and they munch on large doses of shrubs and buds of hardwood and softwood varieties. They eat 40-60 pounds a day, to be exact – willows, birches, aspens, maples and fir.

In the summer, moose feed on aquatic plants in marshes, streams and ponds. The book says nothing about waterfalls. So, Buster and I kept on with our moose roam.

After hours of mud, branches, boulders and streams, it was dusk. A half moon rose in the sky as bats, careening above us, gobbled swarms of mosquitoes.

Fallen trees from the windstorm of last winter lay in pick-up-sticks array as Buster and I climbed over branches and broken tree trunks. Ahead of us, No Ketchum Pond awaited.

The water took on the hues of the sky, pink and deep purple, and in the distance, there was a rumble of thunder. Back at our moose compound, there was microbrew on tap, burgers to be found and respite from moose tour failure and multiple mosquito bites.

Boston in the winter is an adventure and finding a warm nook after exploring a just reward. There are secrets known and undiscovered all through Boston – some coming at you as you cross a bridge to lit-up trees and holiday laughter, others hung on the walls, a silent tribute to inspiration. With stars across the winter sky and twinkling lights on the trees lining the Charles River, I can feel the hush and glow of what’s to come. The central towers of the Longfellow Bridger are decorated with gaping fish gargoyles, lion heads and sculptured Viking Ships.  With the city soon covered in snow and the streets icy, it’s a welcome relief to sip something warm, thinking of Longfellow’s poems: “Chill airs and wintry winds! My ear has grown familiar with your song; I hear it in the opening year, I listen, and it cheers me long.”